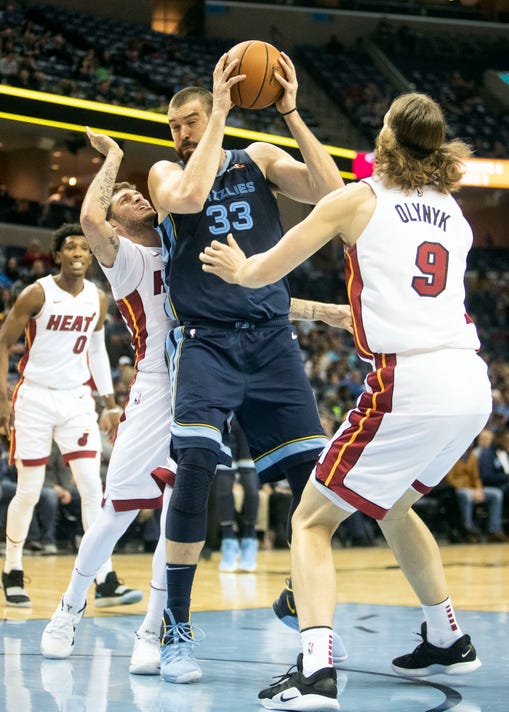 Memphis Grizzles center Marc Gasol (33), attempts to shot over Miami Heat forward Kelly Olynky (9), during the first half of a NBA basketball game between the Memphis Grizzlies and the Miami Heat in the Fedex Forum, Friday, Dec. 14, 2018. (Photo: Ariel Cobbert, The Commercial Appeal)Buy Photo

The middling Heat entered FedExForum five games in to a six-game road trip and on a two-game losing streak.

Playing without franchise icon Dwyane Wade, Miami left a 100-97 winner over a Grizzlies team that went cold from the outside.

See how the Grizzlies stack up: NBA Western Conference standings

As the Heat kept the Grizzlies at arm’s length down the stretch, news broke on Twitter that the Grizzlies were nearing a deal to bring Wizards wing Kelly Oubre to Memphis as a part of a three-team deal that would require the Grizzlies to part with MarShon Brooks and Wayne Selden.

J.B. Bickerstaff earned a technical foul with seven seconds left in the third quarter. The referees handed out two more just 75 seconds into the fourth quarter. 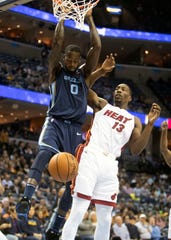 Memphis Grizzles forward JaMychal Green (0), dunks over Miami Heat forward Bam Adebayo (13), during the first half of a NBA basketball game between the Memphis Grizzlies and the Miami Heat in the Fedex Forum, Friday, Dec. 14, 2018.  (Photo: Ariel Cobbert, The Commercial Appeal)

“Come on, refs,” one fan near the court yelled. “Nobody came to see you guys.”

At the 5:45 mark, officials ruled that Marc Gasol committed a technical foul when Gasol struck Tyler Johnson near the neck while flailing his arms after a Johnson foul.

Gasol took a feed from Garrett Temple at the elbow and promptly threw a no-look, over-the-shoulder pass to Jaren Jackson Jr., in the low post. Jackson slammed to bring the Grizzlies  within 60-59 at the 6:31 mark of the third quarter.

In his final visit to FedExForum as a player, 12-time All-Star Dwyane Wade rested because of what the Heat termed “general soreness.”

Wade will finish his career having played in Memphis just three times over his final 11 seasons. Wade’s absence from the lineup left some fans who drove from all over the Mid-South with heartache. 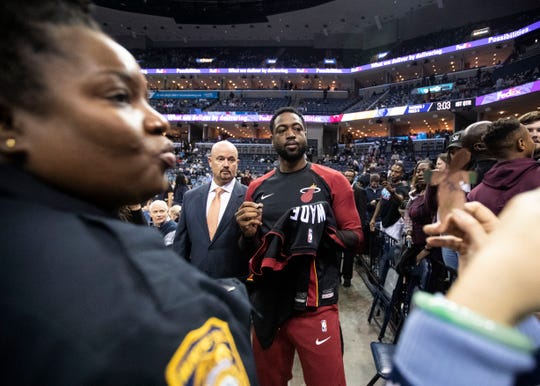 But the 2006 NBA Finals MVP did sign autographs for some fans who congregated outside the visitor’s tunnel.

At one point, a “D-Wade” chant broke out in the arena.

The Grizzlies host the Rockets (13-14) on Saturday night (7 p.m. Fox Sports Southeast). It will be the first meeting between the teams this season.

DWYANE WADE SITS: Out with ‘general soreness,’ Dwyane Wade leaves some in Memphis with heartache