NEW YORK — Frank Ntilikina just got the starting point guard job back and now he’s dealing with an injury.

The 20-year-old guard suffered a strained groin in the first of the Knicks’ 106-97 loss to the Miami Heat Sunday at Madison Square Garden. 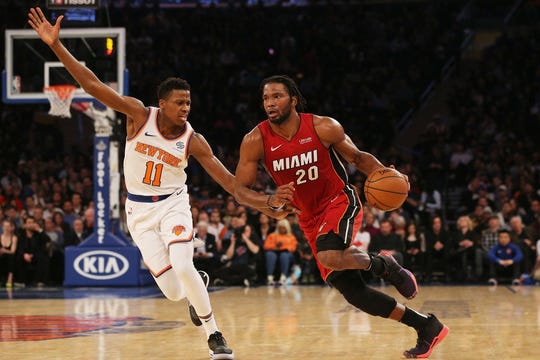 Ntilikina had gotten off to a good start, finishing the first half with six points on 3-of-6 shooting with two rebounds and four assists.

The Knicks were up six points at halftime before being outscored, 29-12, in the third quarter on the way to their ninth straight loss.

“That was a big blow to us,” coach David Fizdale said. “Strained groin right now. He really had huge impact on the first half. Guarding the ball, getting people involved, being aggressive himself. I thought he really had another good game going. Same as the first half the other night. Now it’s a tweak that knocked him off for a little. But hopefully it’s not too bad and we can get him back and get him going right away again.”

Ntilikina has started the Knicks’ last two games with Emmanuel Mudiay sidelined with a shoulder injury.

The Knicks are almost certainly going to need a new starting point guard Monday night against the Charlotte Hornets in the second half of the back to back, which means Trey Burke is likely to get the ball.

Burke has a solid game on Sunday, scoring 16 points on 7-of-16 shooting. It followed a 25-point performance Friday against the Brooklyn Nets.

More: 5 thoughts on the feud between Enes Kanter and the New York Knicks

More: How Frank Ntilikina played in his latest chance to start for the New York Knicks

Miami Heat Rumors: Why best potential player addition is currently the opposition – All U Can Heat